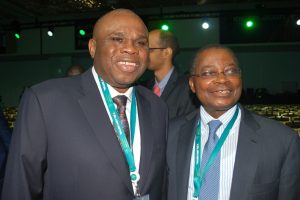 The African Business Roundtable (ABR) under the leadership of Mr. Samuel Dossou Aworet, President and Chairman of the Board, attended and participated at the 26th Annual General Meetings; held from 20th to 22nd June 2019 in Moscow, Russia.

The Afreximbank Annual Meeting (AAM) 2019 was held under the theme “Harnessing Emerging Partnerships in an Era of Rising Protectionism” and deliberated on such topics as: How South-South trade can be a path to Africa’s integration into the global economy; Multilateralism in the current global economic order of protectionism; and The role of investing in Africa’s infrastructure in accelerating intra-African trade and economic development.

ABR President and Chairman of the Board, Mr. Samuel Dossou-Aworet was invited to speak at two very important sessions

Mr. Dossou emphasized the need for building human capacity as a panacea to good governance, which will help create conducive environments for businesses to thrive. He said everyone that is a stakeholder in the political and economic space needs to be trained – the office worker, business executives, politicians and bureaucrats in public service must all be adequately trained to perform their duties effectively.

The Conference, held over two days (20th and 21st June) provided an opportunity for meeting and networking with over 500 delegates comprised of top-level CEOs, high-ranking public-sector officers and Heads of Multilateral Institutions from the Development Community, Academia, private and public sectors in attendance.  The ABR Team led by the President met several notable people amongst which were: